I've Been Gone For Too Long…

I've Been Gone For Too Long…

As I contemplated what to write after more than three weeks of being absent from Golden Life Musings, my brain cells took on a life of their own as they pumped the hook to Ciara’s “Gimme Dat” soundtrack in my head, and there has been no releasing it ever since. Have you ever gotten that one song in your head and no matter what you do, including playing other music, you cannot let it go? Yep, that’s me right now. But for me, as catchy as the song lyrics and beat are, it’s the feeling of what those song lyrics mean for me that’s taken a hold of me.
I grew up on stage and around music. From the time I was four, twirling around in my first tutu (See Beyond the Barre), into my late teens singing in a local girl group, I lived on the stage and I loved it. I also loved to write songs, some of which actually earned me some recognition in a couple of songwriting contests. And then life happened. We can also call it the realities of adulthood setting in. Sure, there are plenty of people who have pursued professional music careers into their adulthood; in fact, my two friends are some of them. However, the sad reality is many of us have done a dangerous thing with passions like this. We’ve set them off to the side and filed it away in the “someday I’ll get back to it” category and unfortunately, many never do. I’m a culprit of this and I did it with my music, a self-professed passion.
A little over a week ago, I appeared on stage again in a reunion tribute concert with that girl group I mentioned above, Visions, which was comprised of me and two of my childhood friends who performed together professionally in the D.C. area in the mid to late 90’s. Until that night, the three of us had not performed on stage together in 18 years. I can’t even believe I just wrote that. Now I’ve sung since then, even on stage, backing up both of those friends at various shows over the years, but not in a featured role. Admittedly, I had been hiding behind my some day until I finally became intentional about my someday becoming right now. All it took was a decision. I said to my girls, let’s do this…and we did. 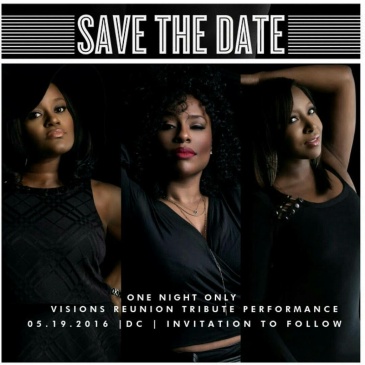 It felt good up there. As I was singing I started to wonder, why has it really been that long since I last performed? I offered up a bunch of excuses in my head, but after contemplating more on that after the performance, the only thing that made any sense for me was fear. Have you ever noticed, in general the older we get, the more fear we have? The fear of being judged, rejected and perhaps most of all, failing is so powerful. I wonder how many unrealized dreams, including my own, have been stopped by that one powerful emotion (See Why Won’t We Be Great).
The reality is as much as I love to sing and write music, I’ve done very little of that as an adult…until now, that is. In the words of Ciara, I think it’s time to bring it back…
See a link HERE of the Visions Reunion on May 19.